When working I’ve recently noticed just how much sugar is in children’s products but also how much sugar laden food/products parents buy to their children. Of course I shouldn’t judge, but the health conscious person in me can’t just shake it off. My goal in the future is to help people make better food choices.

Sugar isn’t the devil as some people think . It’s ok to eat sugar in moderation, but the problem is that people don’t eat it in moderation, they eat it in extreme amounts. It’s not just chocolate and cake and ice cream, it’s in the ketchup, in the juice, in the salsa, in the dressing, in the soda drink, in the flavoured yoghurt etc etc people aren’t aware where all the hidden sugar is, and even less knowing of the sugar in the children’s product’s.

I almost find it shocking to see how much sugar products is bought and produced for children.

Children aren’t. If children get introduced to sugar and sugary products early on they get addicted and used to it and want more and more of it.

Children are the ones who need the most nutritionally dense food because 1) they are growing and need all the nutrients and 2) they don’t need as much calories (most often) as an adult, So that means that they have even less room for junk food. For example a milkshake and from McDonald’s might be 5E% of an adults intake but can be 10E% for a child. ( just an example!).

Kids needs more nutritious food as they don’t have as many calories to “spare” on junk food.

Also you don’t want your child to get used to sugary food and then anything that isn’t processed or has sugar, the kid doesn’t like or want.

I don’t blame the parents, I blame the lack of education but also the companies that fill the food with sugar and salt. Parents aren’t aware of what’s in the products.

If kids learn to enjoy unprocessed food and with treats every now and then it’s better for their overall health, their energy, concentration, weight, teeth etc

I really hope in the future more parents think about the amount of sugary and processed food they give their children. And I understand, it’s easier to just heat up pasta and meatballs than to cook a proper meal and it’s easier to give your child chocolate when it’s screaming in the store than to give him/her a banana. But if you teach your child to like fruit from an early age then they will be more likely to want and eat that.

Of course what’s practical in theory might not work in reality. I don’t have children so I don’t know what it’s like to raise children, but the health nut inside of me wants to help edu ate parents so that they can atleast make a conscious decision about what they feed their children and not think that giving them sugary cereal, sugary yoghurt, sugary juice and processed meat and think that’s healthy.

What are your thoughts about this topic, feel free to comment your opinion whether you think i am unrealistic, harsh or what you think about the education and information available… maybe there should be some form of marking to make it clear just how much sugar is in items?

And let’s make one thing clear, sugar is ok in moderation, it’s all about balance. But the problem is that far too many don’t eat sugar in balance or moderation and that’s when the problems occur. 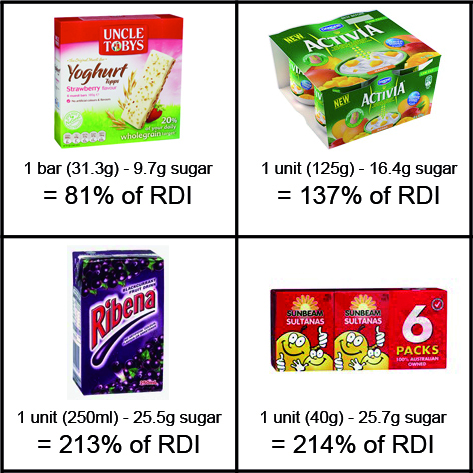