Recently i have been listening to lots of different inspirational guests on the podcast Framgångspodden. Which is a Swedish podcast, so for many of my readers they won’t be able to understand.

One of the things they all seem to have in common – apart from being successful at what they’re doing – is putting their words into actions. It’s not enough to just have a dream or a goal or say that you want or will do something, but it’s about actually doing it. But also many give the advice to just start. Many people live with fear, we live of fear of failure and “what if”…. we don’t even dare start something incase we fail. But how can we know if we don’t even try? 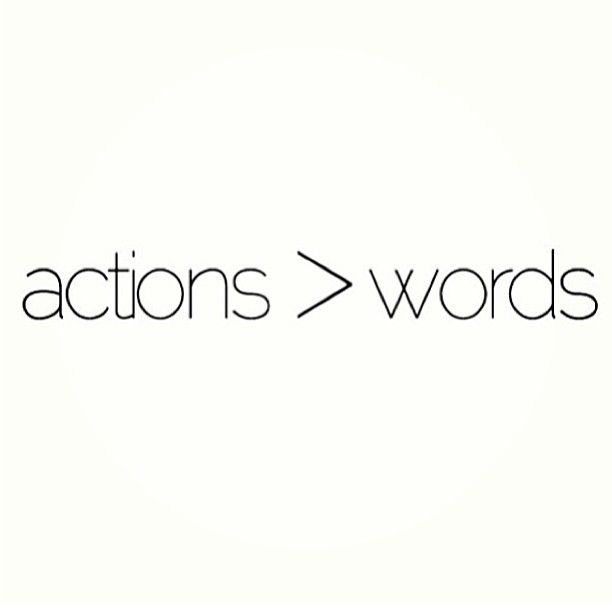 Sometimes you just need to take that leap of faith if you really want something, but also to work hard for it. Being successful is also connected with time and luck but alot of it is hard work and long days to get what you want….. for many, or infact all of the guests, things havent been served to them on a golden plate. Instead they have worked hard, been through failures, made mistakes but learned and grown and been successful anyway.

We will make mistakes and fail at things in life. Sometimes we start something and realise it isn’t worth the time or it doesn’t feel right. But we need to learn from mistakes and grow and be ok with failure if it happens.

I’ve often lived with the motto that actions speak louder than words. People can talk all they want or say they will do things or act a certain way, but their actions will prove if its true or not. I personally believe this is a great motto to live by…. there will be many people who talk big and say alot but actually achieve very little because they never really put the work in.

Something i want to work on from now on is my mindset and fear of failure. I hold myself back because i think “i’m not ready, i don’t know enough, i’m too young, i can’t”…. but instead i should change those thoughts to, “I can achieve all i want to achieve, i just need to put the work in.”

Another excuse i think is “I don’t have time”. But the truth is that i don’t make the time… i haven’t prioritized these goals high enough because i am scared of failure so i haven’t dared put my goals into action. But when i look and see people the same age or younger than me doing what i want to do i wonder… If they can do it, why can’t I?

I also like to use the excuse, I am in school and studying, i’ll wait until i graduate. But life is now. Sure, i can’t start selling meal plans until i have completed my bachelors as that would just be wrong. But there are other things i can do. Of course balancing university and everything that goes along with Uni can be hard and then adding other things to my life as well might be too much… but who knows, if i don’t try i won’t know. Life is now and i don’t want to be 40 and still not have achieved my goals because i kept thinking, “i’m not ready, i can’t and so forth.” I can’t keep using the excuse that i am in school, because there are people my age doing what i want to do and studying as well… so why can’t I? Granted, many online social media influencers dedicate their days solely to their brand and media and don’t also study 100%.

I need to stop holding myself back because of fears. Stop using the excuse that i can’t. Because i can, if i want to. And who knows what will happen…. of course i will make mistakes and fail but that’s part of life and growing. It’s not enough to say i want something, i need to actually work for it!

And this post goes for other things in life such as when i was in recovery – it wasn’t enough to say i was eating or wanted to get healthy, i needed to actually eat and actively work on my fears and my eating disorder. But also with veganism…. not enough to say you care about animals or that you want to eat less meat or dairy… but you need to actually make the change and not just say you will or want to!

I hope this post can be of inspiration to you…. get you to think about your goals and dreams and ask yourself, are you working towards them? Are you holding yourself back in life, and what can you do to challenge your fears?