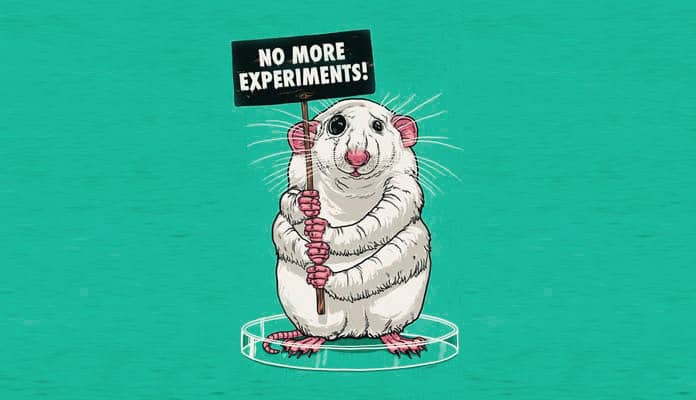 Often when you buy products you don’t even think about the animal testing behind it. When you buy household products, beauty products, medication there is most often animal testing done on either the different chemicals in the product or the complete product. Not to mention the countless amount of animals used in science experiments to test different theories, how the body or cells work, how different foods or diet works and the list goes on. At times it can feel overwhelming to read all the articles and experiments where animals have been used and the different treatments they have undergone just for the name of science and to try to prove a theory.

I have written about animal testing HERE, which you can read more about. And here i will try to summarize what methods can be used instead of animals when testing products.

Animal testing has been deemed as more “Humane” and that it is wrong to test on animals… however it also makes me question, why is it ok for the different experiments to be done on animals who can’t protest or say no, but not ok to do on humans? Why is the life of animals not deemed as equal to that of humans… not to mention that just because a certain ingredient or chemical is ok for animals doesn’t mean it will have the same effect on humans.

Luckily many scientists are forward thinking and more people are realising how animal testing isn’t ok and that we should figure out more humane ways to test and ways that don’t involve animals.

“Modern non-animal techniques are already reducing and superseding experiments on animals, and in European Union, the “3Rs” principle of replacement, reduction and refinement of animal experiments is a legal requirement. In most other parts of the world there is currently no such legal imperative, leaving scientists free to use animals even where non-animal approaches are available” Source

Almost all medicine is tested on animals and this is for safety reasons, which i can understand. And of course, you shouldn’t stop taking medicine just because it may not be vegan… a sick vegan can’t do as good as a healthy vegan. So take your medication… but maybe don’t over consume pain killers just because you can and instead only when you really need to… both for health reasons and for the sake of the animals. You can read more about Is my medication vegan HERE and some animal free medication HERE as well as the campaign, make more medicines vegan.

Today—because experiments on animals are cruel, expensive, and generally inapplicable to humans—the world’s most forward-thinking scientists have moved on to develop and use methods for studying diseases and testing products that replace animals and are actually relevant to human health. These modern methods include sophisticated tests using human cells and tissues (also known as in vitro methods), advanced computer-modeling techniques (often referred to as in silico models), and studies with human volunteers. These and other non-animal methods are not hindered by species differences that make applying animal test results to humans difficult or impossible, and they usually take less time and money to complete.

By doing a biopsy you can test on human cells. Of course how an ingredient/chemical affects just one cell isn’t the same as how it would affect a whole body of cells and organs, but at least it can give some results. Also using human volunteers and also “fake humans/human replicas” are alternatives. You can read more HERE

I believe more companies are becoming aware of the demand for cruelty free and vegan products – even if the company may not care, they just want to earn money. So this is why we need to show that there is a demand for these types of products so that the companies have to change. Many countries no longer have a law that products have to be animal tested, instead they just need to be deemed safe by different regulations. Such as by now we know which chemicals or which combinations or doses may be dangerous so companies really shouldn’t need to test their products. However in some places in Asia and South America there is law to test on animals before being sold and in China they often do their own experiments with the products before being sold (even if they have already been deemed safe.) So a good rule is to NOT buy beauty products that are sold in China because that means that the products have been tested on animals, i.e that the company is ok with the animal testing as it is law for China to test the products on animals. (source) And you can read more about alternatives and why beauty products don’t need to be tested on animals HERE

If you are interested in medicines and vaccines and animal tests you can read HERE.  For now it seems that medication is more necessary to test on animals compared to household and beauty products. However the question of “is it ethically ok” is being raised and also about how many studies are being done i.e how many times do you need to test the same pill and how many medications do we really need.

My belief is that it is wrong to test on animals and when it comes to beauty and household products i do my best to buy CF and vegan products, even if i have messed up at times. But i plan to make a list of some non vegan ingredients which you can keep an eye out both in food and a list for beauty products. I am still learning so it may take a while for me to make that list! And with medication – take it if you need it, that doesn’t make you a worse vegan. But don’t take medication unnecessarily!

And in the future lets hope that animal testing is no longer required and instead we can all be safe and healthy without having to test ingredients, chemicals and products on animals!!!

Watch the two videos below (no, they arent triggering in anyway!)