Sometimes i wonder, why is vegan food or veganism still seen as abnormal…. why is eating meat and dairy seen as the normal thing?

I was talking to my step dad several weeks ago and he said that vegetarian food should be the normal… that when you go out to eat vegan/vegetarian food should be the normal thing you are served, and then if you want meat you ask for it as extra. Not that all dishes have meat/fish/dairy and you have to make a bunch of changes in the meal to make it vegan, or that you have to try to compose your own meal out of side orders.

Something i have also thought about is… why do vegans get so much hate?Ok, well i can partly understand it. There are certain millitant vegans who can make the vegan community seem very extreme and unwelcoming as well as judgemental… but you know what, all vegans have their ways of activism and why shame each others methods. The fact is that when you begin to educate yourself about the meat and dairy industry it is hard to not feel overwhelmed and angry at the world… angry at the amount of animals killed each day just so that people can eat the meat. Or how many animals are tested on for beauty and household products, or how many animals are killed for the skin or fur….. once you begin to realise this it is hard to not want to try to convert everyone to veganism and make everyone else aware of what is happening. However my personal opinion is that forcing people to eat vegan or shaming others for their food choices is not a good idea…. though each to their own, and if someone wants to spread vegan activism that way, then that is their choice and it does make a difference.

What i find strange is when vegans are called the extreme and strange ones, when in actuality all vegans are trying to do is not kill animals or contribute to animal deaths. They are trying to live compassionate lives where animals don’t have to die for them to eat. Where animals aren’t caged up and tested on. I don’t understand what people think is extreme about that? (Of course there are certain vegans who are very extreme i.e won’t use things like sticky notes that might have animal glue on them, or fruit that may have beeswax in the coating etc… at times it can go too far and make life and living unpractical). But if you look at the reason behind going and being vegan you realise there is nothing extreme about it….. In Western society most people don’t need to eat animal products to be healthy (There are some who do need animal products to be healthy due to illnesses. But for the majority of people there is just laziness, unwillingness to change and 100 excuses as to why they can’t go vegan.)

It just baffles me why veganism is seen as strange or extreme. Why people are so against veganism….. going against violence, against animal cruelty, against killing animals… how is that extreme? I think it is mostly the person consciousness… they don’t want to admit that they are eating a dead animal. They don’t want to admit to themselves that an animal has died for their fur jacket or for the food on their plate and so instead call vegans extreme and stupid when infact it is just their own bad consciousness….  But also their lack of knowledge of what vegans stand for and how easy it can be to live and eat vegan. Many think it is more complicated than it actually is.

Veganism should be the normal. Vegan food should be the standard. Why is meat always on the menu but you have to ask for a side menu or a seperate menu to get vegan or vegetarian options. Why are there always ads for meat and dairy?

Of course times are changing and more and more people are going vegan and becoming aware. However there are still plenty of people who are eating extra meat just to spite vegans and gladly send pictures of dead animals or pictures of their meat to vegans (yup… i’ve had people privately DM me pictures of their meat plates and meant it in a negative way. blocked directly!). 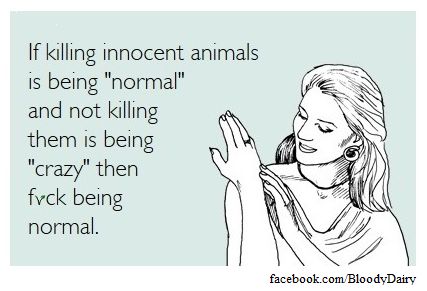