I have grown up always being told to eat fish and that it is healthy to eat fish.

Eating fish may not be ethical or vegan (read more about it HERE), but as a nutrition student and a future of working with health and nutrition, it is important to know about the health benefits of animal products.  It is important to set aside my ethical beliefs and look at facts and individual requirements when you work with nutrition.

Eating fish in moderation can be healthy due to their mono and polyunsaturated fats, as well as well the omega 3 in fatty fish. Fish is also a  source of protein, Vitamin D and iodine which are important nutrients.

However fish isn’t only positive, there are consequences of eating too much fish as well, which is due to the mercury found in certain fish and other toxins (PCB) which come from polluted water which the fish absorb and store in their fat. So there is a higher risk of toxins and mercury from the fatty fish such as salmon and mackerel compared to the more lean/white fish such as cod. However white fish is also mostly protein and doesn’t have the same health benefits as the fatty fish.

Then there is also the risk of bacteria (primarily listeria) from raw fish such as sushi or sashimi which pregnant women, children, elderly or those with lowered immune system should avoid. But there is even a recommendation for girls and women to avoid certain fish because of the toxins and mercury which can affect fertility and pregnancy as well as lead to nerve damage or effect brain development of the fetus. 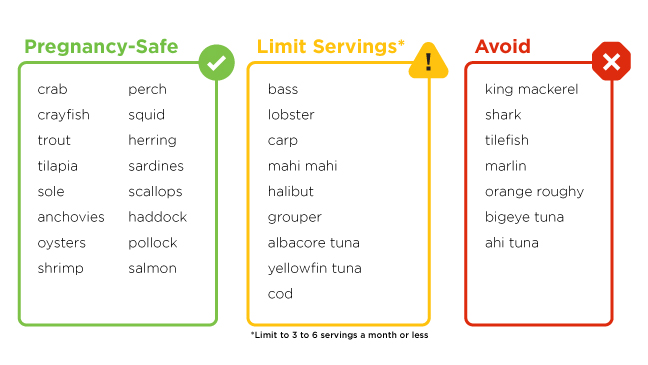 The recommendation of fish intake from the Environmental Protection Agency and Food and Drug Administration recommend for women who are or may become pregnant, nursing mothers, and young children:

Let’s start off with Omega 3! I have written quite alot about omega 3 and how to get plant based sources of omega 3 in my vegan nutrition ebook. So if you want to know more (as well as more information about a plant based diet then that is a good source of information!).

Omega 3 (which is infact 3 different types of fatty acids, EPA and DHA which come from fish and ALA from plant based sources) are an essential fatty acid, meaning that we need to get it from our diet as our bodies can’t produce it themselves. Omega 3 is also antiinflammatory (while omega 6 is proflammatory, so it is important to have a balance between omega 3 and omega 6 intake).

It is also important for brain function and heart health, and has even been seen that people with low intakes of omega 3 are at a higher risk of getting depression. (Note, more research needs to be done on this topic, but it appears that omega 3 can have a link/decrease risk of depression… Source1, source2, source3  . However, fish oil/omega 3 isn’t a substitute for treatment of depression.)

So eating fatty fish, such as salmon is a good way to get these essential fatty acids. However, you can also get plant based sources of omega 3(ALA fatty acids) via walnuts, chia seeds, flax seeds and flax seed oil.

There is also a slight debate about whether children should eat fish or not as the risk of mercury, PCB or dioxin intake from fish can cause brain and nerve damage as well as increase the risk of cancer. But on the other hand, omega 3 is very important for brain development and health, intelligence as well as can lower the risk of developing depression (Source). However, the best is to give children plant based sources of omega 3 to limit the amount of toxins and mercury they consume from fish while still getting omega 3 (for young children you should avoid giving them too much chia seeds and flax seeds as they contain so much fibre which young children can’t digest so well. So instead stick to flax seed oil and walnuts.)

Because omega 3 is so important and has been seen to have positive effects on heart health, antiinflammatory and can be seen to lower blood pressure, it is recommended to eat fish 2-3 times a week (with atleast 1 portion of fatty fish a week being recommended by Livsmedelsverket). However, as mentioned above you can either do a combination of fish and vegan sources of omega 3, or stick to only plant based sources and that can work just aswell.

What about the other vitamins and nutrients in fish?

Fatty fish is also a source of D vitamin. iodine as well as protein. I am not going to get into the protein question, because there are plenty of protein sources as a vegan and you don’t need to eat fish to get protein.

You can get D vitamin from sunshine, or from fish or enriched eggs, also certain margarine has been fortified with D vitamin. However, the recommendation for most people in Nordic countries and colder climate countries is to take a supplement of D vitamin (or take a multivitamin which has D vitamin). As a vegan the main sources of D vitamin come from fortified foods such as margarine, plant based milks and yoghurts etc even if you can get a little from certain mushrooms it is not a reliable source of D vitamin.

And iodine which is important for thyroid health, you can get from iodized salt, and certain seaweed/algae products. As iodine actually comes from the soil, root vegetables do have iodine however the soil now a days has a lot less iodine than in the past and so it is unsure how much iodine you actually get from root vegetables. However the more root vegetables, potatoes, fruits and vegetables you eat the higher amount of iodine you will be consuming. If you don’t consume iodized salt, then a supplement is recommended especially if you are pregnant or breast feeding (if the mother has a deficiency in iodine it can lead to mental retardation of the child and effect IQ and learning abilities of the child. Not to mention lead to thyroid issues for the mother. ) So an important nutrient to consume, however you don’t need to eat fish to get this nutrient.

Eating fatty fish does have certain health benefits, primarily from the omega 3 and D vitamin content.

If you are allergic to nuts or seeds that provide plant based sources of omega 3, then eating a portion of salmon 2-3 times a week can be a good way to get those nutrients.

And if you are allergic or don’t like seafood or fish, then there are plant based sources to get omega 3 as well as d vitamin and the other nutrients.

Because of the mercury and toxins in certain fish, there are some types of fish you should avoid eating especially if you are pregnant or plan to get pregnant soon.

And of course, you don’t need to eat fish to be healthy! You can get all your nutrients and vitamins from plant based sources. But you can also eat fish several times a week and still be healthy as well! So do what works best for you 🙂

You can read a whole report about “fish intake, omega 3, PCB, benefits and consequences” from the Swedish organization Livsmedelsverket HERE

You can read more about a consumer report of fish HERE

I personally take a vegan supplement of omega 3 because i don’t consume alot of plant based sources of the fatty acid, however i know i should eat more chia seeds and walnuts as well – just in case.

I know posts like this are long, but i hope you like them and find them beneficial! I also always try to look at both sides when it comes to nutrition posts like this or when i write about different diets and such. Trying to just present the facts as unbiased as I can… but of course as i am vegan i do promote a vegan diet, but i also accept that not everyone can or wants to go vegan and i won’t ever use scare tactics or propaganda within nutrition to make people eat vegan. A moderate intake of fish can be healthy, but also eating no fish or sea food can be healthy as well, it is all about your overall intake of food and not just certain foods you eat or don’t eat.