When talking about sustainability food waste is one of the factors that needs to be considered.

There is alot of talk about not wasting food – which is super important. Not only do you save money by not throwing away food, it is better for the environment! However the biggest problem with food wastage is not in private households – it is in food stores, restaurants and food production. That is where hundreds of kilo food is thrown away daily. It is actually heartbreaking to think about the statistics of food wastage.

It is not sustainable. Throwing away food is wasting resources, and many times the food is still edible it is just that it can’t be sold. When it comes to meat and fresh food such as fruits and veggies, then it goes bad rather quickly and it is not edible so has to be thrown away. But it sickens me how much meat and dairy products are thrown away daily….  how animals are slaughetered and killed so that they can be eaten – but end up just being thrown away anyway. Animals killed for nothing. It breaks my heart just writing this post, but in a way i would rather that someone actually eats the meat/dairy rather than it being thrown away because that is not only a waste of life, but waste of resources. (However it would be much better – from all aspects if no animals were killed for food.)

This weekend i was working in the bread section of the store (as well as with meat/fish). And each morning you throw away the bread and baked goods that are left over. I had this HUGE conflict inside of me when having to do this…. every part of my mind was thinking, this is not ok. To be throwing away maybe 10kg (or more) baked goods. And the only problem was that they were a day old…. otherwise completely edible. [I do have to note, that the store i work at does donate the left over bread and baked goods to a food charity several days a week, but not during the weekend].

There was nothing i could do but throw it all in a rubbish bag and throw it away. And the same with the meat and fish that had gone out of date. [And during the summer when i worked in the fruit section and dairy section, there was ALOT of fruit and veggies thrown away daily. Several kg or more.] Also… let’s not forget that food stores usually only sell the grade 1 fruits and veggies i.e cucumbers that aren’t straight or fruit and veggies that are slightly deformed (still completely natural) don’t even make it to the stores because they don’t “Look as good”. Usually these can be found in farmers markets though!

^This was just some of what i had to throw away ONE DAY. I was super conflicted and felt awful having to do it 😦 😦 😦 ^[Note, not actually allowed to have my mobile on me when working….. this could cause me problems, but hopefully not]

And this is just one store…. I can’t even estimate how many kilo food is thrown away each day from just one store. And times that by the amount of stores in just one city….. and in one country. It is insane. And then of course all the bakeries, cafes, restaurants, food companies….

Of course, most stores and food businesses do keep an eye on sales. And if a certain food or product isn’t selling so well or alot is being thrown away daily/weekly, then they will order less of the food to minimize food wastage – because it does cost the business to have to throw away food.

Food wastage is everyones business and of course, if you can minimize your food wastage that is amazing. But if you end up throwing away from scraps from time to time, that is not the biggest problem. The biggest problem is all the big businesses that sell food in some form. It is a political and much higher problem that needs to be resolved and something needs to be done about this.

Earths resources are limited and at the rate that we are wasting food it is not sustainable. Not to mention that in the western world we are throwing away food in a rapid pace, while in other countries there are people starving. Infact, there are people starving and homeless in our own cities and countries and we throw away food like it is nothing – when instead we could feed the homeless in our own cities. But because of capitalism, businesses don’t want to give away food for free – if they did that, people would stop buying food. (Or so they think….. I don’t believe that. Even if businesses give away food to food charities, people will still always pay for food. But we should atleast try to help those that can’t afford to pay for food.)

10 facts about food wastage from foodtank.com 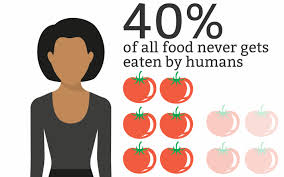 To produce food requires land, water, chemicals, electricity, energy both in the form of tractors/machines/human energy, transportation (between countries and within the country). And then there is the electricity and energy and heating/lighting in the stores and cafes and restuarants where the food is stored. It requires so many resources – only for a certain percentage of the food being produced to be thrown away. A complete waste of resources. It is not sustainable – but there is such a demand for food and we are producing more than is necessary, while a part of the world is still malnourished and dying of starvation.

If i am honest – i really don’t know what we can do about this. As mentioned, it is a problem that is much high up than just in the private household. I think it is something that politicians need to take responisbility over and make laws that can lessen the amount of food waste each year. But also that business owners take responsibility.

As mentioned, many business owners and food stores do keep an eye on how much is thrown away. But you can never really know from day to day and there will always be food wastage. The fact is that resturants, stores, cafes etc they always want an abundance of food just to “make sure” as well as it looking better if there is plenty to choose from rather than just few foods/items to choose. This of course also results in huge amounts of food thrown away because most often the demand isn’t as high as the supply.

I don’t know what we can do about this….

I guess as private households to not throw away as much food. But also when possible – buy food that is close to the best before date if we know we can freeze it in or use it before it goes bad – this saves the store from having to throw it away.

Also shopping at stores online, such as matsmart (or if you have a similar store in your country) where they sell foods that won’t sell in regular food stores (either because the products are close to the best before date [but still fine to eat], or maybe the packaging is a little dented and so stores don’t want to sell them, or if the store just ordered too many and canät sell them. So you can buy them for cheaper in the online store.) Or even buy reduced food from certain cafes/resturants that often sell the left over food for a cheaper price. There are usually apps for this, i think!

I feel very down about this right now… i just wish there was more i could do, but it is such ahuge problem that one person can’t fix.

If you have thoughts about this or tips or ideas, please comment below… i would love to know your thoughts!

**Also in this post i didn’t even mention all the fast food restaurants, schools, hospitals etc that throw out food daily.

You can read more at FAO resources, HERE