I got the question of how to deal with people eating non vegan around you, when it comes to social events.

Or infact, i got asked the same question but from two different perspectives:

So the first angle, how to not get angry – well i try to think that getting angry at people or accusing people of being “murderers” isn’t going to make anything better. If anything, it will make them defensive and less likely to want to listen or change.

What i try to focus on is inspiring others, and i do that by 1) making tasty vegan food and 2) getting others to try the vegan food or get tempted to try the food. Also, i focus and encourage discussion and conversation about a vegan lifestyle and plantbased diet.

I read up on facts so that i can answer with real facts and not just with propaganda, fear or anger.

Of course, i am lucky that my family are pescetarian and so they don’t eat any red meat or poultry, but they do eat fish, egg and a little dairy. Also, usually when i am at home they eat 99% vegan so i never really have to deal with them eating alot of animal products around me. Not to mention that they already know alot of information and we have had plenty of convesations about veganism and a plant based diet. And they do try to eat as vegan as possible even when i am not at home.

I understand though if you are the only vegan and the rest of your family eat ALOT of meat and animal products around you. It can be tough to feel “Ok” when those around you are eating alot of dead animals, and that is all you can see. If you find it too tough then you can either 1) speak to your family about it, however if they are the type that don’t want to listen or don’t want to change their ways maybe you can choose to skip the eating together part and instead eat your meal on your own and join for the rest of the celebrations? Or if possible, if you can find other vegans in your area to celebrate with. I have seen in some FB groups which i am part of that each year there is sometime a vegan get together for those who don’t want to celebrate with their family or can’t celebrate with their family. Otherwise,you could always be the one to arrange it (next year anyway, as it may be a little late now!).

Also another thing is to focus on how many people ARE turning vegan each year. Focus on how much progress there is in vegan products (all types of products). Companies have stopped testing on animals, banned fur, stopped the hunting and killing of certain animals and the deamnd for meat and animal products is declining while the amount of vegan options on the shelves is rapidly increasing.

It can be tough, but focus on all those positives and know that even if your family aren’t supportive of your choices – there are many out there who ARE vegan and do care. Try to focus on inspiration and not anger – though that is just my opinion.

And onto the second question…

How to deal with not eating all the animal products when you are new to a plantbased diet.

And my answer to that is 1) Make sure you have plenty of vegan options to eat. 2) Veganize your favourite recipes. 3) And better to make too much than to have too little.

You could always watch some vegan documentaries (POST here) to help you feel more confident and secure as to why you choose to be vegan.

Those are the things that helped me in the beginning – now i am not tempted at all to eat any of the animal products that will be on the Christmas table this year. Infact, i am jjust excited to eat all the delicious vegan options i have made. 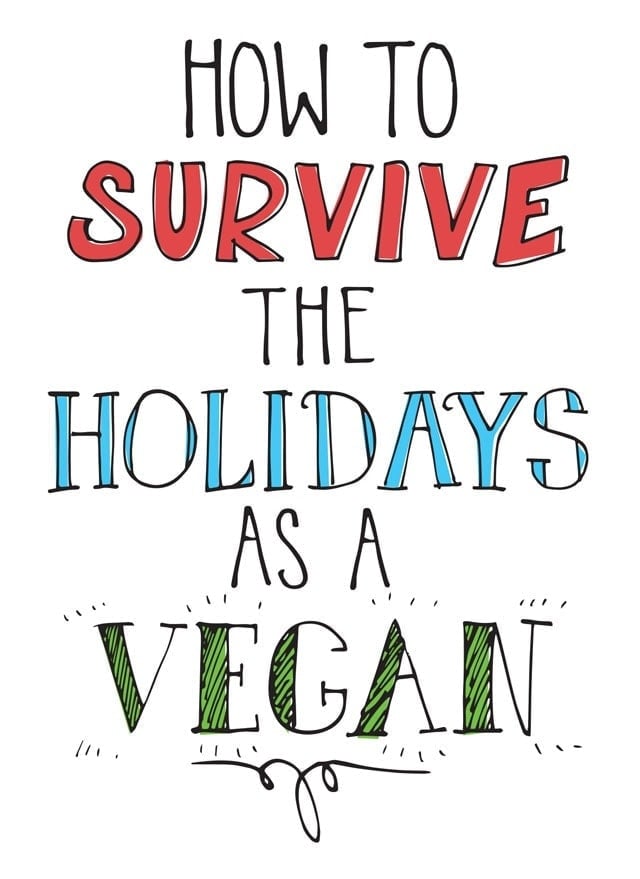 Whatever situation you are in this Christmas (or any other celebration/season), you can get through it.

Hopefully one day the majority of people will be vegan and it will be more uncommon to actually eat meat or animal products. Where 99% of people eat all vegan and there will be that 1 person who sits at the table and eats meat isntead of the other way around as it is in many households now a days.

Let me know your thoughts on this or if you have any advice for others in these situations!

Also, i have a post with tips on going vegan: Guide to going vegan – Masterpost. Useful resources & Thinking about going vegan? Masterpost with vegan information!